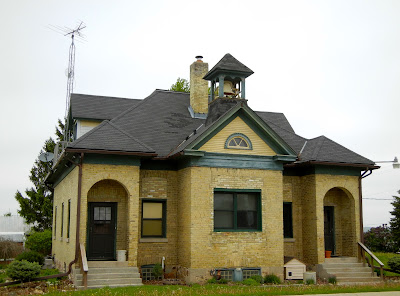 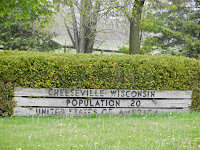 Last year I posted a couple of photos from old one room school houses in the area. At that time I said I would travel a short distance to the area where my mother-in-law grew up & take a photo of the school she went to. Well, I did that this week. The first photo is the school where she went to school. It has been added on to and converted into a home. It was a one room school house at one time, with two doors; one for boys, the other for girls! The old school bell is still there. This was the school for the country kids. My mother-in-law passed away a few years ago, but she told me that she sometimes rode a horse to school!
A old sign to the side of the school reads 'Cheeseville Wisconsin , Population 20, United States of America' 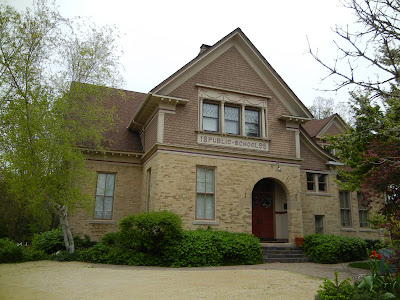 A little further down the road is the school the town kids attended. Obviously this was a larger building. It has also been added on to and has been converted into a (very nice!) house.  The old lintel-piece reads:
18 Public - School 85
(built in 1895).  This area was heavily settled by German and Luxembourg immigrants.
I don't know how much of this house was the original school and how much is new. 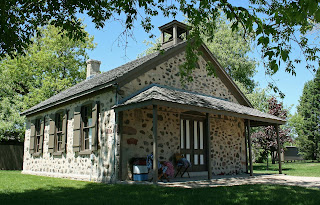 A few more miles miles is Stoney hill School. It is used as a 'living museum' and many school children go there on field trips to see what schools were like in the old days.
It is considered the birthplace of (America's) Flag Day.  Teacher/schoolmaster Bernard J. CiGranda, a Luxembourg immigrant  petitioned for the holiday and wrote books on the subject of the flag & patriotism.
Unfortunately I had to borrow the Stoney Hill  photo from the internet because mine didn't turn out.  I'll go out there again one of these days as there is also a Pioneer Village nearby.

Rose
Southeastern Wisconsin, USA (all near Waubeka, Wisconsin)
Posted by Day at 6:01 PM