As many of you know, the carnival - a period of public craziness before Lent - is a big thing where I live. People take the opportunity to make the sobering up of Lent worthwhile by going completely nuts for five days before it starts. Apart from dressing up, drinking a lot of beer and singing loudly in dialect, the main attractions are the parades which are being held in the individual quarters as much as in the city centre. My quarter has theirs on Shrove Tuesday.
I'm pretty sure I posted a photo from the Shrove Tuesday parade in my street last year, too, and this year, I watched it from the same location, namely my balcony. :D I like this photo because you can see so well what the top of the float looks like, with the store of stuff to throw to the crowds and the people busy digging around in it. :D 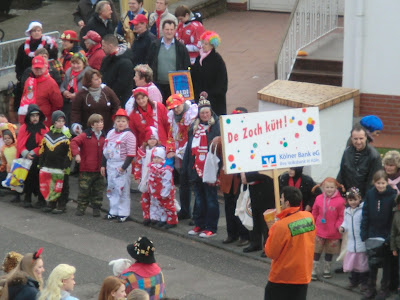 And here's one from the beginning of the parade - the sign says that the parade is coming :D - I thought I'd add this one because of all the cute kids by the road. :D
Posted by Monika at 5:12 PM