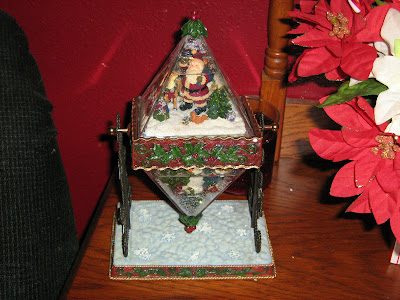 This is the most unusual snow globe I have ever seen. I saw it last night at our New Years Party at a friends parents house.

The reason there are two photos is that it is a triangular snow globe that spins and each side is a different scene. When I say it spins I mean it tilts and the scene at the top becomes the scene at the bottom.

Look closely, the first scene here is of Santa with some creatures such as a reindeer.

The second side when you tilt the snow globe to the other side is a snow man. 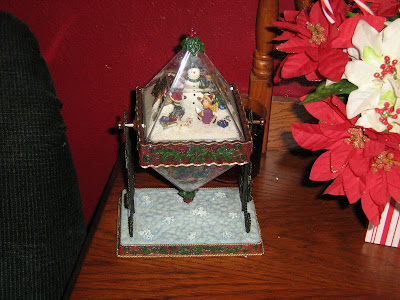 This is the most unique snow globe that she had but she showed me others that were very cool.

One was the nativity scene where a smaller scene of the wise men on one side and Mary on a donkey on the other, travel around the base of this snow globe in search of what they seek. The Wise men seek the baby Jesus and Mary is seeking shelter to have the baby. This globe was huge.

She has another one that is about Santa where there is an outer globe apparently since Santa on his sleigh is mounted on the outside and it travels around the snow globe over the world. Very cool!!!